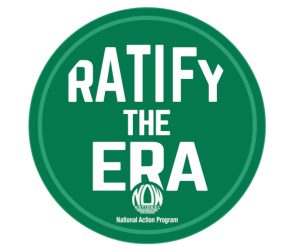 “Equality of rights under the law shall not be denied or abridged by the United States or by any State on account of sex.”

*UPDATE: ERA PASSED BOTH THE HOUSE AND THE SENATE IN VIRGINIA. HJ Res 79 and SJ Res 6 to remove the ERA DEADLINE ARE NEXT.*

Virginia-SJR 284: Ratification of the ERA passed in their Senate, but…

The Virginia “House Privileges and Elections“ subcommittee blocked it from reaching their House floor.

Victoria Cobb, third-generation anti-ERA activist lobbied hard and is good friend of the subcommittee chairperson, Del. Margaret Ransome (R). Both are wives, mothers of four children, and have successful careers. Both feel they did not need an amendment to achieve their successes or to protect them in the workplace, home, or public places, so the rest of American women don’t need the ERA either.

-Action: Need to push other states to ratify the ERA

Regarding removing the “1982 Deadline for Ratification” language from the preamble to the ERA wording.

-Action: Contact Sen. Dick Durbin (D-IL) and Sen. Tammy Duckworth to encourage them to be co-sponsors

ACE Health, Education, and Welfare Team Member Janice Podolski is a retired faculty member from the Department of Pharmacology at Rush University Medical Center in Chicago. She was a registered nurse for fifty years and has a master’s degree in Nursing and Ph.D. in Physiology. She volunteers at Loaves & Fishes Community Services and with PADS in DuPage County.