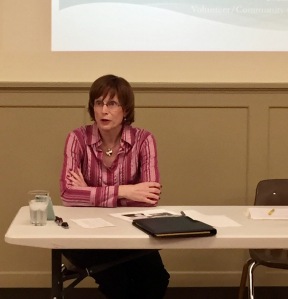 Vosicky defined the acronym LGBTQ+, which stands for Lesbian, Gay, Bisexual, Transgender, Questioning, and Queer. The plus includes Intersex, Allies, Asexual, and 2-S, a Native American term for those who fulfill mixed gender roles. The acronym is really about the spectrum of sexuality. The old, binary thinking of you’re either this or that doesn’t work anymore.

“As the kids are coming in,” Vosicky said,” they don’t care what happened before. They’re bringing a whole new way of looking at things.”

The word “queer” is a good example. For many of us, it was a pejorative. Now, the word has been reclaimed with pride as an umbrella term that includes all of the variations of orientation and identity.

“Don’t worry,” Vosicky said. “All of us are behind the curve. We’re constantly adjusting to the times.”

For example, it’s okay to ask someone what pronouns they use. Would they rather be referred to as he, she, or they? It’s important for allies to talk about it. “Every time you do, you let an LGBTQ+ person feel safe and know it’s okay to discuss things,” Vosicky said.

Sexual orientation and gender identity are not the same thing. Sexual identity is biological, while gender identity is the identity you experience in relating to the world. These external expressions can be defined as feminine, masculine, or neutral, while gender expression is how you choose to represent yourself. Sexual orientation is relational to other people—who you’re attracted to or not.

An excellent way to illustrate this is the Genderbread Person by Sam Killermann. Click here to view his TED Talk on this subject.

The Realities of LGBTQ+ Youth

Remember how terrible middle school was? It was a cluster of emotions on even the best of days. Now imagine how difficult LGBTQ+ kids have it. The average coming out age is getting younger, and presently is 13 years, 3 months. When they do, there’s a 50/50 chance they’ll get a negative reaction from their parents. More than one in four are thrown out of their homes, according to Youth Outlook. Forty percent of all homeless youth identify as LGBTQ.

But even if their parents react well, 85% have been verbally harassed for their sexual orientation and 55% for their gender expression in any given year, the GLSEN 2015 National School Climate Survey states. Sixty percent were sexually harassed, and 27% were physically harassed. Then there’s cyberbullying to contend with when they get home from school, which 49% experience, so there are very few safe places for the kids to go.

What can we do?

“Many of us with LGBTQ family and friends accept and embrace them without fully reflecting on the hurdles they’ve had to jump daily (and continue to jump) in so many situations,” said ACE-Naperville Leader Beverly George. “We should open these conversations with them to offer them a comfort zone to share with us. We care. We are listening. We hear them. And we support them.”

“Be visible. Encourage teenagers you know to join the Gay-Straight Alliance at their high schools,” Vosicky said. “The more support from the community, the less chance of suicide. You’re saving a child.”