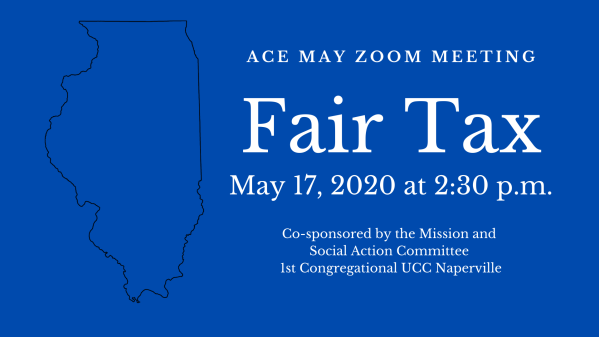 Due to the global COVID-19 Pandemic, ACE held its first virtual meeting on May 17, 2020. Co-sponsored by the Mission and Social Action Committee of the First Congregational UCC-Naperville, the Zoom presentation featured Sarah Yousuf and Mina Patel from the Community Renewal Society, part of the broader Vote Yes! for Fair Tax Coalition of Illinois organizations.

As it stands right now, Illinois has a flat income tax of 4.95%. The coalition asserts this is fundamentally unfair because the tax burden falls too heavily on the middle class and those struggling to get there. According to the coalition, the bottom 20% of Illinois earners have two times the tax burden of the wealthy. They also think the current system is inadequate because it causes budget deficits that push up property taxes and force cuts to schools, public services, and jobs.

Statistics cited by the coalition note that at least 97% will see no income tax increase, with a majority of middle and low-income families will actually receive a tax cut. Only those making more than $250,000 a year will pay more. (See the table below.) Coalition members also note the proposed Fair Tax will expand the Illinois property tax credit from 5% to 6% and will implement a child tax credit of $100 per child.

Since the current Illinois tax system is written in the state’s constitution, changing it will require a referendum vote to amend the constitution, which will be on the November 2020 ballot. 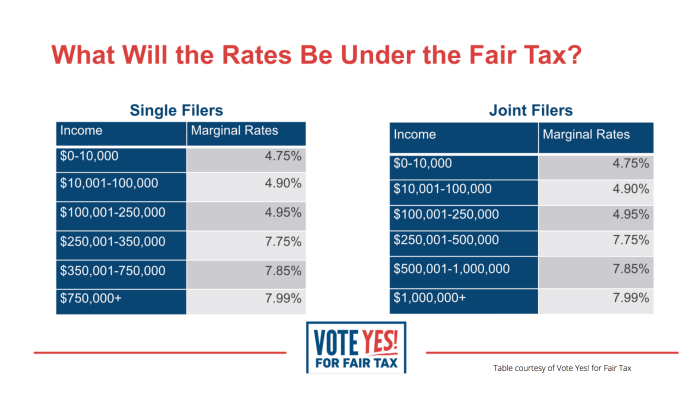 For a piece on from the Center for Tax and Budget Accountability on how this plan will affect Illinois small businesses, click here. To read about the top four arguments against the Fair Tax, read Eric Zorn’s April 24, 2020 column.